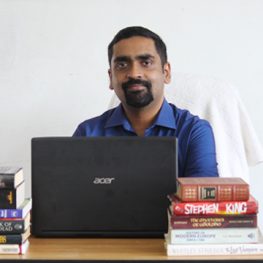 Tennyson Thomas is an Assistant Professor in the  Department of English at RVCAS. He completed his post-graduation in English Language and Literature from UC College, Aluva, with a thesis in Cultural Studies based on the origins, ontology and evolution of the vampire myth throughout the ages and places. He also has a post-graduation in MA History along with a Diploma in Human Rights. Tennyson has worked as Assistant Editor at the English section of DC Books at Cochin Office and Kottayam Head Office. He is also a part-time film critic and editor, with certificates in Hardware and Networking, Multimedia and JAVA Programming. He is currently pursuing Ph.D in English Literature, and is writing his maiden novel, an untitled post-apocalyptic dystopian thriller.

His interests include MOOC courses, movie reviews and Real Time Strategy (RTS) games including Age of Empires and Warcraft and Turn Based Strategy (TBS) games including Age of Wonders and Disciples: Sacred Lands. His blogs also cover a wide range of topics from film criticism and travel writing to short fiction and gaming. He is also a traveller who earned an invite to Outlook Traveller Responsible Tourism Summit at Delhi ITC Maurya in the year 2015, and a responsible citizen and blogger who was selected to represent the Indian blogging world at India Today Conclave at Taj Delhi Diplomatic Enclave with the topic, “A World Remade” in the same year.

Selected for representing Indian Bloggers during the India Today Conclave 2015 based on the topic “A World Remade” at Taj Delhi Diplomatic Enclave.

Part of the environmental campaign by Green Yatra, Bengaluru, and in recognition of the contributions to the cause, a tree was planted by the NGO with the name “Tennyson” in the city.

Former Film Critic at the Australian Website, Kiagia and other international websites earning regular personal invitations to review independent movies from all around the world.

Film Critic at Movies of the Soul, and a member of the Large Association of Movie Blogs (LAMB), world’s largest movie directory and community.

Selected as the top movie blog in India (Movies of the soul) during the time period of 2015-2016 by IndiRank system.

Received a score of C1 Advanced in the British Council – English Score Test.

Edited the retellings of Indian classics including the epics Mahabharata and Ramayana which were used by Real Reads, Newbury, Berkshire, UK.

Edited and designed the magazine of Viswajyothi Public School, Angamaly for the academic year of 2013-2014.

HOD, Department of English at RVCAS

Member of the College Council at RVCAS

Previous Next
Close
Test Caption
Test Description goes like this